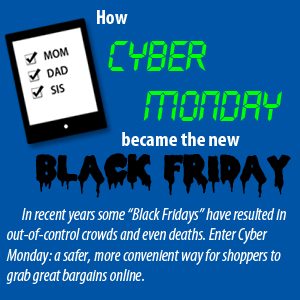 Cyber Monday: Behind the Numbers

The Nov-Dec period each year is not only an important time for Americans because of two main holidays — Thanksgiving and Christmas, plus an assortment of unofficial holidays from various cultures — it’s also an important time for retailers. In fact, it’s become something of a tradition to shop for bargains on the day after Thanksgiving, aka Black Friday, to get a start on Christmas shopping.

Unfortunately Black Fridays of recent past have resulted in out of control crowds and even deaths. There’s also Thanksgiving Weekend as popular shopping days, but those can be hectic as well, if you can even find parking. Fortunately, in the last few years, there’s Cyber Monday and a whole lot of shopping going on — online, that is.

Cyber Monday, which falls on the first Monday after Thanksgiving, is the online sibling event to Black Friday. Forget the crowds; there’s often free shipping, and you can buy pretty much everything you need online. If you know what you want, Cyber Monday may be the way to shop, which saves you more time to enjoy Thanksgiving Day and the rest of week/ weekend with friends and family.

The following figures show total online retail shopping sales totals for Americans in the years 2007-2012. (These numbers refer to purchases made on retail shopping websites.)

A significant portion of the yearly online sales totals, above, are produced during the approximately 60-day period of Nov-Dec, with online sales from Thanksgiving Day through Cyber Monday often being indicators of how well retailers will do in Dec. Here are some general facts and figures surrounding Cyber Monday, as well a few other general facts for comparison. The numbers below include a mix of figures for both online sales for retail websites, as well as overall online sales. Assume “retail” sales unless otherwise indicated.

Cyber Monday by the Years

Here is a yearly breakdown of Cyber Monday figures, starting with total sales figures, along with some related facts.

The following figures refer to the number in millions of dollars of online sales for retail websites.

Here is how Cyber Monday has ranked in terms of highest-grossing online shopping days for the years 2005-2012.

The figures below refer to top web sites by visits, not sales.

The most-frequently searched for retailers on Cyber Monday 2012 were Wal-Mart, Best Buy, Amazon, Sears and Target.

Factors that might affect Amazon’s sales and visitor dominance on Cyber Monday 2013 include the new online retail tax that went into effect in some states in 2012. The U.S. has no federal sales tax, but the Internet tax is to be collected by websites on the basis of the buyer’s location — but only in states where a retailer has a physical presence. Amazon has been exempted by some states for a period of years, but some exemptions are running out. Other states have decided that Amazon should still collect and submit tax even if they don’t have a physical presence. Massachusetts, Connecticut and Wisconsin are at least three more states for which Amazon will be collecting taxes from online buyers — making for 16 in total for 2013.

Here are some dos and don’ts for shopping online on Cyber Monday.

Reference
Information for this article was collected from the following pages and web sites: